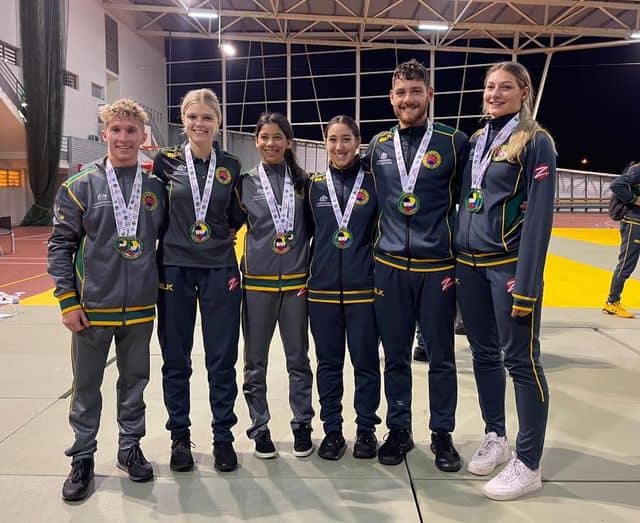 Seven athletes from WA were selected to represent Australia, however only 6 went over as Olivia unfortunately tested positive for Covid the day of flying! Jayda Gledhill, Keira Sanft, Dylan Fisher, Hannah Sullivan, Tegan Forrest and myself.

It was a whirlwind competition with most athletes flying in on the Saturday and then having to get set for a big 2 days.

The Oceania Championship events on Sunday ended up being a 12 hour day due to a lack of experienced volunteers/officials. For majority of the day, events were almost 2 hours behind schedule. That definitely impacted the whole team, coaches/managers included, and a lot of athletes were drained by the end of the first day. The last bus (which is the one I was on) only got back to the hotel at 11:54pm – that made getting up at 6am for breaky the next day pretty tough.

In saying that though, everyone pulled through and soldiered on as you have to, and it was still an enjoyable tour. There was a really nice sense of unity within the team, from my experience it’s nice to see a significant shift in the culture, which I think as definitely been driven from the senior group and even new coaches such as Con Pap.

The Monday was the Oceania Cup ‘Open Weight’ events, and the Oceania Championship Team events. This was an amazing day especially with the Senior team events at the very end. The spectacle of the lights, fireworks, and main stage where the finals were set was absolutely amazing. I understand that this could have been the reason the event ran so far behind schedule as they probably put a lot of energy into the show, but I think I can speak on behalf of all athletes and people watching that it was greatly appreciated.